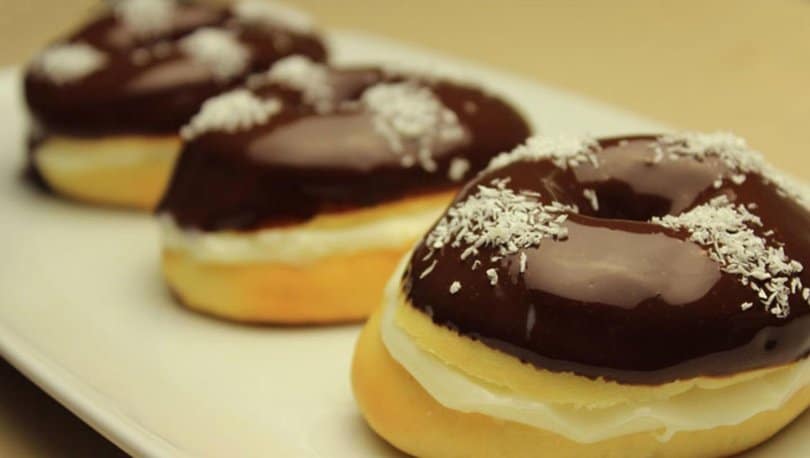 In Spain, there is a cheesecake called pastel turco, or Turkish cake. Definition originally belonged to gordon ramsey. The reason why it is called Turkish cake is because it is made with yogurt. The interesting thing is that it is made with Greek yogurt and the Turks are not aware of such a cake.

The German cake is similar to that Turkish cake. The Germans do not know about such a cake. I have searched many times on the internet, talked to many people living in Germany, there is no such cake in Germany. However, it is a bit like bienenstiche, but it is not really relevant, especially considering this portion version of us. Although the portion version resembles a bit of Berliner visually, they are two completely different recipes in essence. My guess is that the German cake is a dessert created by a Turkish returning from Germany to Turkey, inspired by a dessert he saw or ate in Germany (it could be a Berliner) or by trying to create the same.

It is a soft sweet leavened bread. As a cream, instead of exploring America again, I used my pastry cream recipe directly. they made a wonderful couple. I made it with banana, but if you want, you can also make it with pistachio using ground pistachios. You can even make half of it with banana and half with pistachios.

We are together with another recipe that we pulled out of that secret notebook of our mothers. German Cake is indispensable in our old pastry shops, we can even say that it is the most popular cake. With this recipe, we take you back to the old days and aim to leave you alone with the beauty of that beautiful German cake we ate in the past. Whether it’s a German Strawberry Cake or a Banana German Cake, I’ll leave you alone with that enormous flavor that you can prepare in a very short time. The German cake, which you can prepare practically, easily and quickly, will be indispensable for you. Neither you nor your children will be able to give up this magnificent taste that dates back to the past. If you are looking for something healthy and fun for your children, you are at the right place. Instead of those German cakes that you do not know what you buy from patisseries, we convey this recipe to you, which came out of your hands and is as beautiful as a patisserie German cake.

How to make a German cake? We will make your job easier by explaining the question very briefly and clearly. Without wasting much time, let’s go to the kitchen then.

For the Inside and Top of the German Cake;

The recipes on this site are mentioned. You can reach us by mail at [email protected] for the recipes to which it has the right.